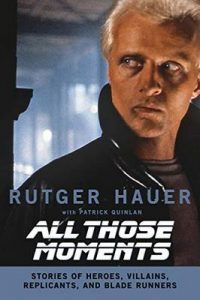 Titulo original All Those Moments: Stories of Heroes, Villains, Replicants, and Blade Runners

He came to mainstream prominence as a machine more human than his creators in Blade Runner, terrified us as a hitchhiker bent on his own death and the death of anyone who got in his way in The Hitcher, and unforgettably portrayed a lonely king roaming the night as a wolf and pining for the love of a hawk during the day in Ladyhawke.

Rutger Hauer has dazzled audiences for years with his creepy, inspiring, and villainous portrayals of everyone from a cold-blooded terrorist in Nighthawks to a blind martial arts master in Blind Fury, but his movie career was nothing compared to his real-life adventures of riding horses, sword fighting, and leaving home at fifteen to scrub decks on a freighter and explore the world.

From poverty to working with a traveling theater troupe to his breakout European performance in Turkish Delight and working with legendary directors such as Paul Verhoeven (RoboCop and Basic Instinct) and Ridley Scott (Alien and Gladiator), Hauer has collected All Those Moments here