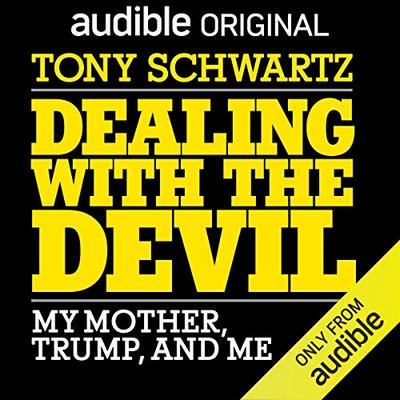 Why are we the way we are? Who can we become? What stands in our way? In Dealing with the Devil, Tony Schwartz investigates these sweeping questions by fiercely reckoning with his own life choices, regrets, and aspirations. He confronts the shame that arose after he helped craft a persona for Donald Trump in The Art of the Deal that 30 years later aided in his election as president. He provides a window into understanding our complicated relationship with Trump, and the Trump in each of us. Finally, Schwartz explores how the experience of writing The Art of the Deal prompted him to take an entirely different path in his life. This path led Schwartz to a lifelong exploration of the factors that shape our beliefs and identity, the influence of our early caregivers, and the ways that we can heal and grow by accepting and acknowledging both the best and the worst in ourselves. Schwartz’s story is defined not by his time with Trump, but rather by his lifelong quest to become a better human being—as a husband, a father, a grandfather and as the CEO of a company devoted to helping others more skillfully and wisely manage their lives. «Tony Schwartz helped Donald Trump establish his legend by writing The Art of the Deal for him—and then, decades later, watched in horror as Trump sought, then won, the presidency. In this incisive memoir, Schwartz writes unflinchingly of the flaws and fractures in his own psychological makeup to illuminate the ragged cleavages and chasms in Trump’s. Schwartz’s account of how he eventually healed and moved forward is brave and instructive: The nation will have to follow a similar path.» -Eugene Robinson, Pulitzer-prize winning columnist for The Washington Post. «Schwartz has crafted a compelling and deeply personal account of the ways in which he wrestled with the decision and consequences of writing the book that helped make Donald Trump president, and with the aspects of Trump that he saw in his own mother and in himself. Dealing with the Devil is a story about honesty and self-reflection, great expectations, pain and ultimately, redemption. It’s marvelous.» -Joy-Ann Reid, host of The ReidOut on MSNBC «Few writers have had a closer view of Donald Trump than Tony Schwartz, who co-authored The Art of the Deal, the best-seller that sold Trump nationally, and falsely, as a business icon. Now Schwartz has come forward in Dealing With the Devil to tell the fascinating truth about Trump, and about himself. Schwartz’s psychologically probing account is highly engaging, politically provocative and deeply revealing.» -Jane Mayer, Chief Washington Correspondent, The New Yorker Magazine, Author of Dark Money