Deliverance by Fire: A Practical Guide on Self Deliverance Through Thunder and Acidic Warfare Prayers – Felix A Ezeukwu [ePub & Kindle] [English] 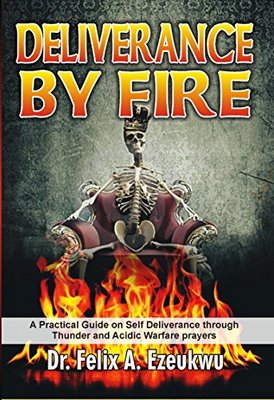 DELIVERANCE BY FIRE is a book that teaches you how to exercise your authority in order for you to gain freedom, freedom from the incubus, freedom from the succubus, freedom from the ancestral gravities, freedom from evil foundation, freedom from generational backwardness, freedom from family captivity, freedom from mark of hatred and the bondage of eunuchs dealing with us unknown to us spiritually. For example, incubus and succubus are the demons sponsors by the demonic kingdom to destroy and pollute human race. How? The incubus spirit is an evil male spirit that lies upon women in their sleep to have sexual intercourse with them.
The succubus is a female spirit that comes at night to have sexual relationship with men. There attacks are usually concentrate on the individual while he or she sleeps and he or she may be awakened with fondling hands, caressing hot lips and tongue and other form of lust, including stimulation.
The same is applicable to ancestral spirits, powers and demons. Example, ancestral powers are foundational powers that caged every man negatively from his foundation. They are evil powers resident in a person’s foundation and never to let go. Family and household wickedness powers come in different shapes and sizes. Example, ancestral powers carry over family problems from one generation to another generation through the family blood line or pattern.