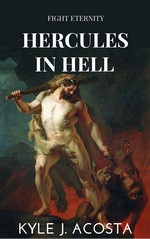 Fight Eternity. When Hercules descends into Hell to fetch the demon-dog Cerberus, he finds more than he ever could have imagined. Instead of the familiar realm of Hades, he’s plunged into a world of demons, devils, minotaurs, beautiful women, and horrific suffering. Can Hercules find his way back to home or will he fall to the demonic hordes? Watch as the greatest hero in history struggles with an abyss beyond his darkest dreams. . .