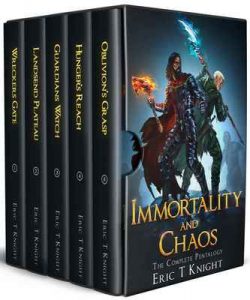 Includes all five books of the Immortality and Chaos epic fantasy series
A forgotten prison. A powerful artifact. A world teetering on the edge of destruction.

Ignoring the warnings of his oldest friend, Wulf Rome removes the ancient, mysterious axe he finds embedded in a wall in a cavern deep underground. The axe’s shocking power wins him the throne, but removing it cracks a prison built millennia ago.

A prison built by the gods to hold Melekath, the one all of them fear.

Now Melekath reaches into the world once again. Unfettered, his three nightmarish Guardians spread havoc across the land. Plagues and monsters appear in their wake.

In the midst of the chaos, an enigmatic stranger appears. He claims to be immortal. He claims that only he can save the world. There is something sinister about him, and the weapons he offers are dangerous and perhaps uncontrollable, but with the apocalypse looming, what other choice does Wulf Rome have?