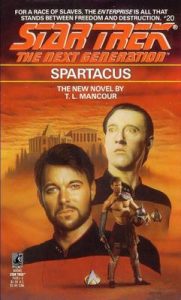 Answering a distress call, the U.S.S. Enterprise(TM) finds a damaged alien vessel — the Freedom — crewed by a race known as the Vemlans. Their captain, Jared asks for assistance in repairing his ship — assistance Picard and the U.S.S. Enterprise are only too happy to provide. But once begun, their relief efforts are interrupted by the arrival of an entire fleet from Vemla, who claim that Jared and his crew are escaped slaves — and their property As Jared and his people plea for protection and the right to be free, Captain Picard is caught between the demands of his conscience and the dictates of the Prime Directive. And when the Vemlan fleet threatens to fight if the U.S.S. Enterprise doesn’t stand aside, Picard must choose between the safety of his ship…and the annihilation of an entire race.