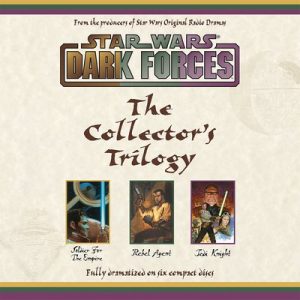 Kyle Katarn has joined the ranks of legendary Star Wars heroes such as Luke Skywalker and Han Solo. A timeless adventure of revenge and honor, the trilogy is set in a shimmering universe of sound that only digital technology can fully capture.
In Soldier for the Empire, Kyle Katarn, having just graduated from the Imperial Military Academy, learns of his father’s murder. On his way home, he meets a Rebel agent, learns the ugly truth about the way in which his father died, and swears revenge.
In Rebel Agent, Kyle learns more about what his father found in the Valley of the Jedi that ultimately led to his death. Kyle finally earns his Knighthood as a Jedi, and the stage is set for him to avenge his father’s death and stop the Dark Jedi from taking control of the source of energy that lies underneath the Valley.
Jedi Knight, the exciting conclusion to the series, has Jerec, the Dark Jedi, bringing his forces to Ruusan in the final part of his search for the Valley of the Jedi. Destroying anything that gets in his way, Jerec reaches the Valley just ahead of Kyle Katarn and Jan Ors. With the help of the indigenous inhabitants of the planet, Kyle and Jan confront Jerec’s Jedi and prepare for a final showdown with Jerec. If Jerec defeats Kyle, the unlimited power contained in the Valley will enable him to rule the galaxy. Are Kyle’s untrained Jedi powers enough to defeat Jerec?