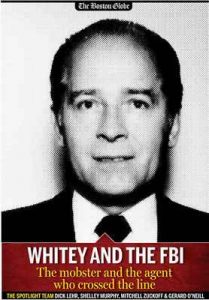 Titulo original Whitey and the FBI: The mobster and the agent who crossed the line (Spotlight on James

His story exposed the very essence of power and corruption, institutional and personal. He had law enforcement agencies, not to mention law enforcement agents, at each other’s throats. He got the FBI to eliminate his competition, and look the other way as he expanded his criminal empire and eliminated rivals.

Whitey Bulger had already been the focus of several investigations by The Boston Globe’s Spotlight Team when he was the subject of an additional series in 1998. Nine years after the Globe reported that Bulger was an FBI informant, a federal judge had forced the FBI’s hand: The FBI admitted Bulger’s partner in crime, Stevie Flemmi, had been their informant since 1965, and that Bulger had been their informant since 1975, even as he murdered people and expanded his criminal empire. In fact, the FBI admitted that they maintained Bulger as an informant for three years after the Globe exposed him.

Building on the Globe’s earlier exposes, “Whitey and the FBI” takes the story to another level, showing the FBI’s duplicity to have been far worse, far more sinister, than anything the original Spotlight team could have imagined: Elements within the FBI had helped Whitey Bulger murder potential witnesses against him.

“Whitey and the FBI” is the third act of a fascinating drama (see “The Bulger Mystique” and “Whitey’s Fall”) that led to Whitey Bulger’s capture in June 2011.