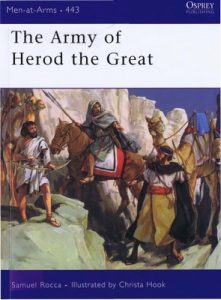 Titulo original The Army of Herod the Great (Men-at-Arms)

“The Army of Herod the Great…draws upon ancient texts and the latest in Israeli archaeological reports and findings to piece together the strength, arms and armor, organization, and tactics of this ancient field army… The Herodian army was a complex amalgam of Hellenistic and Roman influences, and is relatively obscure even among academics, making this study a particularly challenging one to undertake. Thankfully, author Samuel Rocca is more than up to the task. A teacher and curator at the Bible Lands Museum, Jerusalem, Rocca studied and completed his MA at the Hebrew University of Jerusalem before researching his PhD on Herodian Judea at Bar-Ilan University. In other words, he has the credentials to pull of this project. One of the most impressive touches is the manner in which Rocca routinely explains the manner in which he arrived at his conclusions, such as the size of any given military unit or campaigning army. Finally, it should be noted that the book is richly illustrated with photos of relevant artifacts and original full-color artwork reconstruction by Christia Hook.” ―Andrew Hind, Strategy and Tactics (December 2009)

“Osprey’s ‘Men-at-Arms’ series offers a narrowed focus on equipment and uniforms throughout history and military collections will appreciate some new additions. Samuel Rocca’s The Army of Herod the Great surveys the military skills of one of Rome’s most important client kings.” ―The Bookwatch (January 2010)