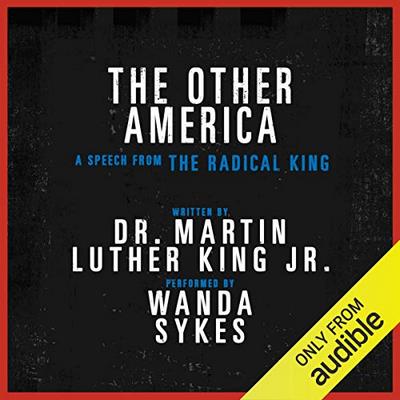 In a rousing speech on race, poverty, and economic justice – given less than a year before his assassination – Martin Luther King Jr. drives home the mission behind his Poor People’s Campaign. It is a clear-eyed look at the disparity of wealth in America, what it means for people of all colors – and a message of inspiration dedicated to the power of the people. «And I say, if we will stand and work together, we will bring into being that day when justice will roll down like waters and righteousness like a mighty stream. We will bring into being that day when America will no longer be two nations but when it will be one nation, indivisible, with liberty and justice for all.» Wanda Sykes’ powerful performance delivers King’s compassion, outrage, insight, and vulnerability like few others could – and reminds us all of the relevance his words still have today. «The Other America» is one of 23 speeches and essays from The Radical King, curated by Dr. Cornel West, including words never recorded in public – a revelation for his legacy. The Martin Luther King Estate has allowed, for the first time, a dramatic interpretation of King’s words, by some of the most charismatic and activist actors working today: LeVar Burton, Mike Colter, Colman Domingo, Danny Glover, Gabourey Sidibe, Wanda Sykes, and Michael Kenneth Williams. «The Other America» excerpt from The Radical King is free of charge to all listeners until Monday, April 2, 2018. To preorder the full, revealing collection, visit www.audible.com/TheRadicalKing.