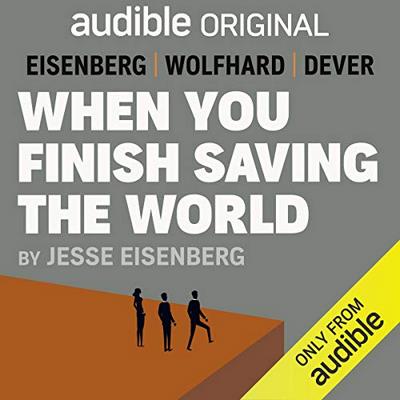 From playwright, author, and Oscar-nominated actor Jesse Eisenberg, When You Finish Saving the World tells the moving and evocative story of three individuals working to understand each other and themselves: Nathan, a father learning to connect with his newborn son; Rachel, a young college student seeking to find her place in a relationship and in life, before marriage to Nathan; and Ziggy, their son, a teenager hoping to figure out where he came from, and where he’s headed. The shifts between time frames in these characters’ lives span more than a decade and eloquently capture the complexities of growing up, having children, and fitting in. Eisenberg—the star of The Social Network, The Squid and the Whale, and Zombieland—stars as Nathan; Kaitlin Dever, star of Booksmart and Unbelieveable, is the voice of Rachel; and Finn Wolfhard, star of Stranger Things, plays Ziggy, their son.